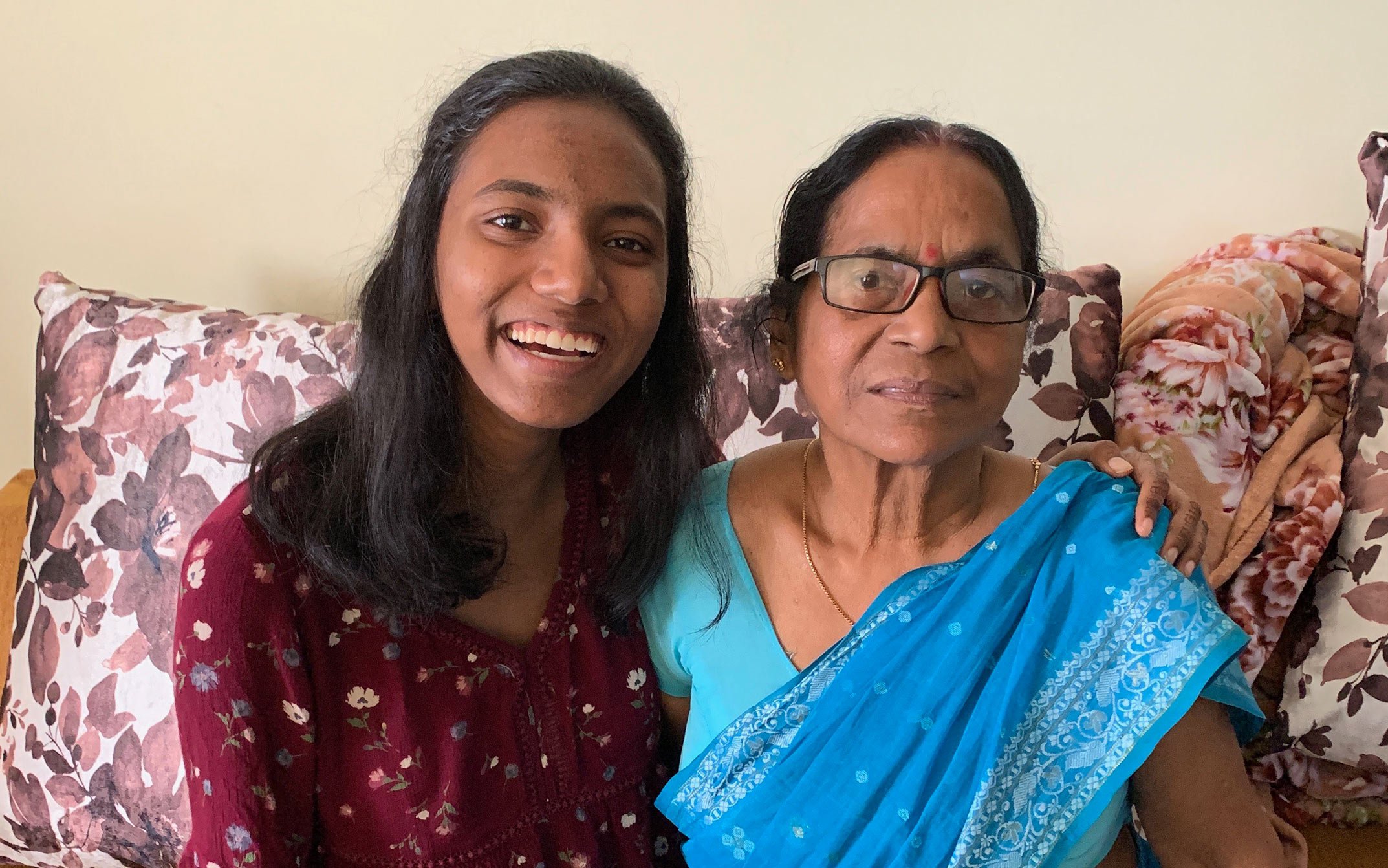 I tiptoed out of the shower, grabbed a towel, and ran out the door. Today, I had a plan. After scrubbing my tiny, wet feet on the carpet, I broke into a sprint across our hardwood hallway—through the home office, to the living room. And I had almost made it before she enveloped me into a bear hug no five-year-old could have gotten themselves out of, lathering my arms and legs with lotion. I had lost the battle between me and my grandmother and her moisturizer, and that was the way it was always going to be.

My grandmother Pushpam Kusum was the youngest of her siblings, born shortly after her parents escaped Bangladesh due to fear of religious persecution. Her parents left their wealth and fruits of their hard work behind in Bangladesh, only to pass away soon after my grandmother was born in India. This tragedy changed the course of her life—she spent her childhood living in her various households, sometimes with a brother or sometimes with an aunt. She recounts having spent days handwriting the contents of an entire textbook because she could not afford it herself. Even using borrowed resources her entire academic life, she excelled. Her determination is unparalleled, and it showed as she surpassed classmates in academic endeavors.

But her journey did not stop there. Women seeking education in India was not normal, and she overcame every obstacle in order to obtain a college degree. With her siblings to support her and act as both her mother and father figure, she graduated with a degree in psychology from Sunderwati Mahila College in Bhagalpur—one of the most prestigious colleges in the state of Bihar. She had many offers but finally chose to teach. My mother loves telling me about my grandmother’s desire to be a mentor for other students, never having had one herself. She made sure that my mother and her brother focused on their education and never had to face the same struggles she did. But the most admirable thing my grandmother taught me was not to take my education, my freedoms for granted. The freedoms that I am privileged to exercise are the same freedoms that my great-grandparents died for—for bringing their children to a safer country where they could succeed. My grandmother has taught me to be open-minded and eager to learn and understand perspectives that differ from mine.

My family’s fondest memories with my grandmother are enjoying her triangle-shaped parathas filled with sattu, or ground black chickpeas with onion and cilantro. She’ll grind them before anyone else wakes up and then make us all shower before we eat. She reads magazines to keep herself entertained when we aren’t around, and when we call her at night before bed, she’ll tell us some of her favorite jokes. The jokes are another way for her to teach my sister and me conversational Hindi and phrases we wouldn’t hear otherwise. I’m thankful that my grandmother found it critical to teach me Hindi, giving me a skill that will never lose its use. When I had trouble rolling my tongue to pronounce “duh” and “dhuh,” I thought I would never be able to grasp this new language, but my grandmother made that possible by encouraging me and teaching me that hard work and faith was all I needed. Pushpam Kusum pushed through every obstacle to lead a rewarding life, and she has taught everyone she mentored and everyone in her family to do the same. Now, she, too, is challenging herself, learning a new language to stay concentrated and proactive, fighting dementia.