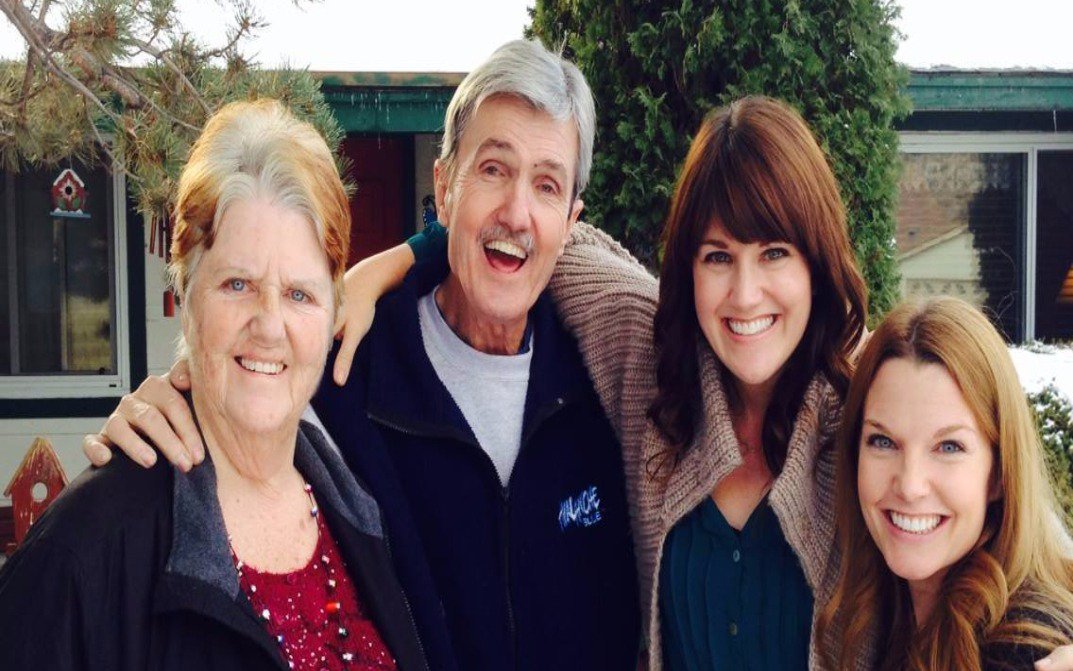 My mom was diagnosed with early-onset Alzheimer’s six years ago. And last month, in the bed she shared with my dad for forty years, in the home I grew up in, she passed away.

My sister, dad and I were by her side (so were her cat and dog), holding her hands, telling her how much we loved her, thanking her for raising us and loving us and making us laugh, crying tears of unbelievable sadness and relief, and praying for her to let go and be at peace. Eleven days after she could no longer eat or drink, she finally gave in. Once a fighter, always a fighter.

This seems unimaginably young to die from such a death. From any death, really, but especially this one. I used to think Alzheimer’s was pronounced “Old Timers” because I only ever knew really old people who had it. My mom wasn’t even old enough to retire. How could she possibly get Old Timers?!

And yet, I know she’s not alone.

My sister and I attended the Alzheimer’s Association Caregiver’s Conference a couple years ago and couldn’t help but notice that we were the youngest people in the room. This made us feel sad and angry and really sorry for ourselves. “We’re way too young to be dealing with a mom with Old Timers,” we whispered between speakers. “This is so unfair!”

But then we started talking to people.

While by and large we were some of the youngest people there who were losing a parent to this disease (“Grandparents don’t count,” we would angrily tell each other. “We don’t even HAVE grandparents!”), we were not the only ones dealing with an early-onset diagnosis.

We met one woman whose husband had been recently diagnosed. He was still in the early stages of the disease where symptoms and behaviors are mild enough that they’re almost funny. One of their biggest concerns was making sure he cheered for the right team while watching his kids’ high school baseball games.

That almost killed me.

Because, while I still felt like we’d been robbed by this terrible disease, I now had some perspective. It could have been SO MUCH worse. My mom got to see me and my sister grow up. To graduate from college and get married and have kids and just generally jump out of the nest and fly. As a mother myself, I imagine that has to be the greatest feeling in the world. To know that all your years of hard work and sacrifice were not in vain. That all the life lessons and foundations and love and support you gave year after year actually paid off. That your life’s work truly meant something. I can’t even imagine how fulfilling that must have been.

As we gathered around my mom for the last week and a half of her life, I couldn’t help thinking, she kind of nailed this. I mean, who gets to die at home surrounded by the ones they love? It’s what most of us want but how many actually get to go out that way?

It’s a testament to the surprisingly great job my dad did caring for her that she never had to go to a nursing home. If you would have told me he’d be able to do it five years ago, I never would’ve believed it. And yet, he completely rose to the occasion. I guess, in a way, we all did.

As people came by the house to say goodbye, I was touched by how far reaching my mom’s love had been. Story after story filled my heart with joy as I realized what a full life my mom had lived. Sure, it had been cut short, but quality always prevails over quantity.

Those last ten days together were some of the most precious of my life. I am so grateful to my mom for laying the foundation. For teaching us right up to the very end. For showing us that even on the darkest days, there’s always a reason to laugh. For knowing that a good game of Cribbage can fix almost anything. She will live on forever in the hearts and minds of those she loved and for that, I am truly grateful.