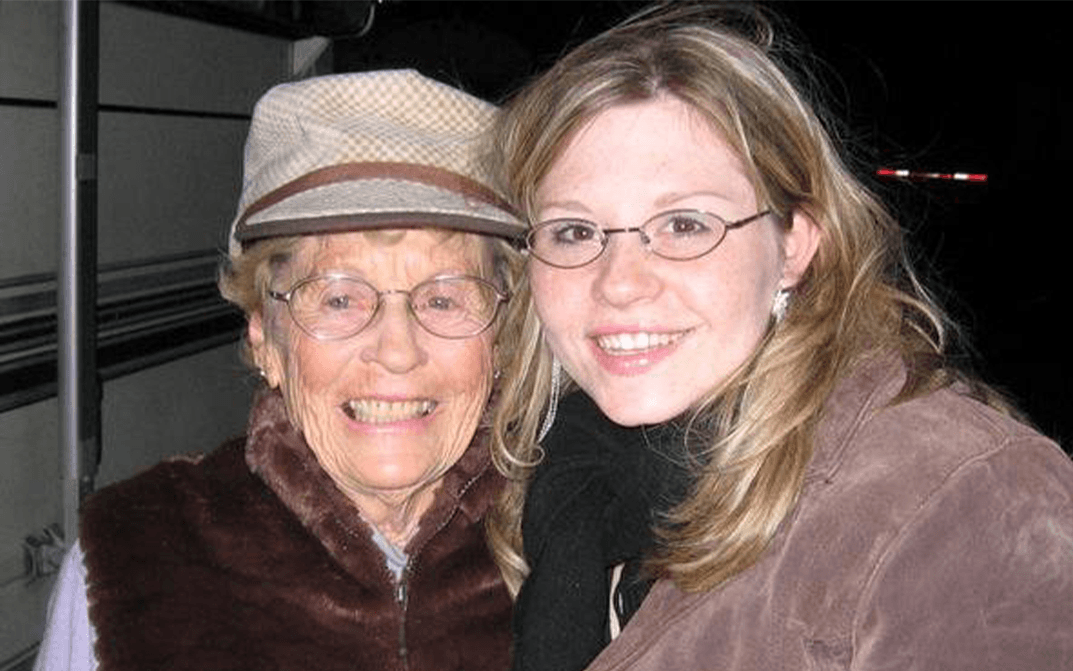 My Grandma was one of the most active ladies I knew. She skied between 500 to 600 miles every winter and completed 5 mile walks or hikes daily. She ate a healthy diet, but loved to have a blizzard from Dairy Queen from time to time. My summers were spent with her, because my mother was a single mom raising three kids. I was my mothers last child from her last marriage to my grandma’s only son.

Grandma Bev taught me how to sew, make handmade gifts, and be an independent child. After all she had been raised on a farm, so teaching a child independence was a great thing. In the summertime, she had me active in swim team, biking, riding horses, and spending time with her folks, my great grand-parents. We would complete the summer by going school-clothes shopping before she brought me back home to my moms. My summers were full of many activities along with all of her time, love and support.

The biggest memory I have is us laughing a lot. As I got older she teased me and kept asking me “when are you going to have a baby?” I had a college sweetheart, but I shared with her times were different. I wanted to be done with college and settled into a career before having a family.

In 2005 I noticed big changes in her personality. She would be bubbly one minute, but then forget the things I had asked her. She started to get frustrated. From 2005 to 2010 I saw huge declines in her personality. She would call me 5 to 8 times a day. When I would answer she would say “Brooke, I want to talk to Brooke”. I would tell her it was me and she would say the same thing over and over. Over time the calls still came in, but she just said my first name. She could no longer form full sentences. I reached out to her third husband, but he would not say what was really going on with her. However, I instantly knew in my heart that something awful was unfolding and I was hardly prepared for it or what was to come.

I gave birth to my first son in May of 2010. My husband and I decided to plan a trip to go and see my grandma so she could meet her great-grandson. When I reached out to her husband, he told me not to come as he had placed her in a full time care facility. That night my husband and I drove 8 hours to her home to find out where my grandma was. Thankfully, she had been put in a wonderful care facility, but leading up to it and parts of her Alzheimer’s unfolding was something I was not prepared for. I was not prepared to see the well put together active grandma who raised me as a different person altogether. I was not prepared to see her in a lockdown unit of a care facility with her sweet face pressed against the glass. Her clothes were disheveled, and she looked more like a bag lady then the grandma who was well put together from head to toe with a bright charming personality. Some days she would recognize me. Other times she did not know it was me, but she would say “I like you.”

She did get to hold her great-grandson and loved it. It made her laugh. Sadly, her time was quickly coming to an end. In February of 2012, the disease had finally taken over her brain. She laid in her bed, not talking, not eating and not speaking. She was not in a coma, but she was also not aware of anything. Her body was shutting down. I spent the next five days telling her stories, talking to her, and holding her hand, until she took her last breath in my arms on the 24th of February in 2012. I watched her peaceful fly away to become my guardian angel.