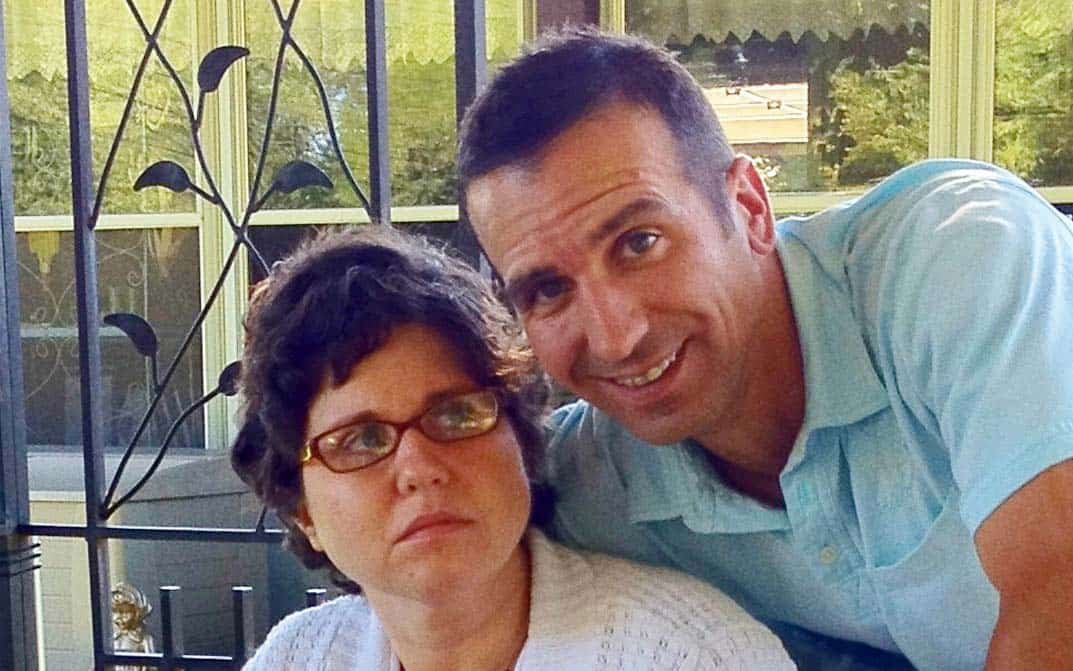 My little sister, Kimmy was my best friend. She was 32 and the mother of two beautiful little girls. Kimmy worked about a block away and would always stop over on her lunch break to chat and share a good laugh. Eventually, she began to forget her shoes to go walking, her car keys or her lunch. When I would talk to her, she would seem to not pay attention to me and just kind of stare off. I would get mad and say “can you at least look at me when I talk to you?” We started to notice that something was quiet not right. She went to the doctors and they kept telling us that she was just depressed. Our family would tell them that she is not depressed and it has to be something else. Kimmy knew something was wrong. She would tell us “my brain is broken; I can’t fix it”. She went through a numerous set of brain tests and electric shock therapies. Then I received a phone call from my mother. “Kimmy has dementia” were the only words I heard. I just stood there, heart racing 1000 miles a minutes, sweating, crying and in disbelief. How can my little sister have dementia? She is not old? Why not me? What happens now? No one is ever prepared for a family member to have this disease, let alone a young lady. She was diagnosed with frontal temporal lobe dementia. My mom and stepdad took her in because it wasn’t safe for her to be home alone with two girls to take care of. She began to have trouble eating on her own, would wander off and her speech became mumbled. It became too much for them to take care of her 24/7 as her condition was deteriorating. They started looking into nursing home but no one would want to take her because they said she was too young or unless she was going to pass away within two years. We found there was no support or help for someone this young. The Alzheimer’s Association stepped in and they were a blessing. We eventually found a care facility 40 minutes away. They treated her like a princess and would even call her “Princess Kimmy”. She would just walk around the floor with her bright blue eyes and always had the biggest smile on her face. Visitors always thought she was a guest and some even let her out the locked doors. Thankfully, she had an ankle alarm. She progressively got worse. There came a point were she didn’t talk anymore. That devastated me knowing I would never her my sister tell me she loved me again. But, I could still see it in her beautiful eyes. My mom and stepdad were there everyday. My dad and step mom were living in Florida and would come up every chance they could. When I would go up, sometime I would take her for walks and hold her hand. Other times, I would just hold her and cry. I am her big brother, I am supposed to protect her! You get a feeling of such helplessness. It was not easy to watch her drift into a kind of twilight zone. But she showed love and courage the whole way through this dreadful journey. Kimberly Holtz passed away November, 25, 2012 at the young age of 36. She touched so many lives in her short stay her on Earth and will continue to do so through her spirit and my work with the Alzheimer’s Association.

Seeing my little sister slowly dying before my eyes made me sad, made me angry, made me feels many emotions all at once. I could let these emotions control my life, but I decided to let them fuel my passion to help raise awareness that this disease affects the young as well as the old.

The last two years, I have done the Walk to End Alzheimer’s and my team (Keep Kimmy Smiling) has raised over $18,000 to support my little sister. My goal is to spread awareness that this horrible disease affects young people as well, so they can get the help and support they need and make nursing care facilities aware so they can become better equipped to provide care for the younger population of this disease. I want to take this to a national level. You can join me in my fight by also joining my Walk to End Alzheimer’s. Just go to the site and enter my name (Brian Sciarabba) under “find a walker”.

I WILL make a difference!